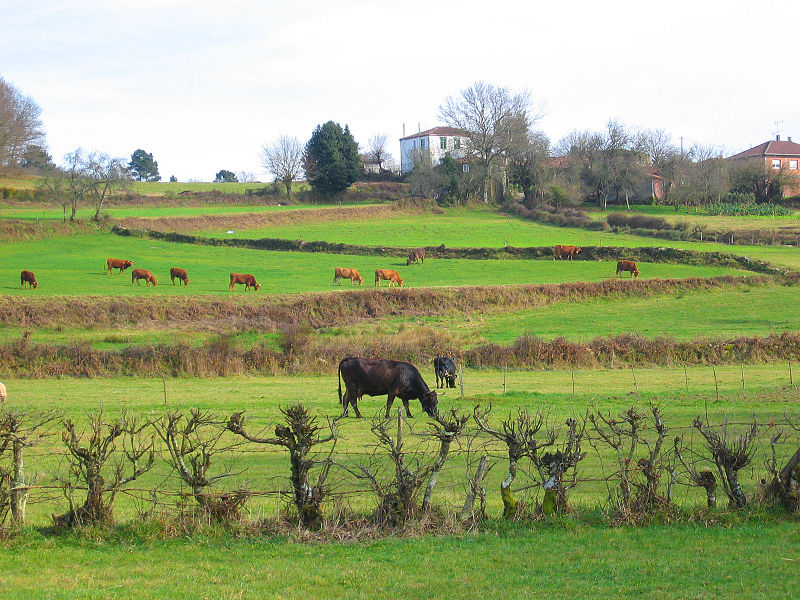 The Galician countryside is awsome… all green and nice (image). Rains started and the way is not as confortable as these past days, but still beautiful.

After three days of ‘short’ tracks, now we head the last days with new strength and a focus on the arrival to Santiago. Today we arrive to the border between three regions: Lugo, A Coruña and Pontevedra.

Palas de Rei is a nice town to arrive and rest a bit before the last two stages, that will be long!

Bodies move, things are in flux, paradigms change. Moving refers to bodily movements, to social movements, migrations, but also meta-movements like the changes between paradigms, the exchange between theories, scholars, disciplines. Although there has been some critique of what is seen as a conflation of archaeology and heritage (Smith and Waterton 2020). The relationship between archaeology and heritage is however complementary and is required for both disciplines to move forward and the ways in which the disciplines are practiced could also separate them from each other.  It can also be said that a lot of the debates on both heritage and archaeology have been led by a Euro American perspective. Theoretical frameworks such as cultural-history or evolutionary models about subsistence have long held their sway on how migration has been perceived worldwide. Through archaeological tools and techniques evidence for contemporary political and ideological agendas gain credence. As heritage is (an entangled) process, the involvement of other archaeologies, flows and things not only stuck in the past, but relevant in the present and perceived as tools for future making may encompass categories of analysis. The general idea of this session is to think through the category of movement (Ingold, 2011). Within archaeology, move may direct our attention to the questions of temporality (time changes, generations come and go). Finally, moving may relate to emotions and affects (Supernant et al. 2020), the ways in which heritage is moving us (Smith 2020). This call aims to debate Mobilities and Archaeology as a tool for assessing the past, its narratives and contemporary politics. Therefore, these are some of the suggested topics:

1.  “’Movement and Cultural Heritage Transformation due to Migration among the Tamil and Paris Diaspora Communities” Smriti Haricharan & Jerri Daboo

The rootedness of communities in a specific region/place and its relationship to the idea of continuity and authenticity is explored in this paper. The contrasting examples from the Tamil and Parsi Diaspora are examined since the two communities have different histories in terms of the physical existence of a homeland. The state of Tamilnadu in southern India, can literally be translated to the land of the Tamil and it is known that the Tamil diaspora does maintain kin relationships as well as ritual practices in Tamilnadu. At the same time how much movement occurs in terms of the objects, either contemporary or inherited, both across generations and space is something that would be interesting to explore. In comparison the Parsi community retains its affinities and connections much more through ritual practices and kin relations than a shared geographic location such as a homeland. The ways in which communities choose to hold on to specific practices, rituals or ideas and how these are passed down across generations is significant in terms of exploring how cultural heritage is understood in the context of South Asia its diaspora communities, examining the movement of people, objects, and practices, due to migration.

2. “Marking the Landscape: Stone monuments on the route of movement of Austro-Asiatic communities in Jharkhand” Himanshu Shekhar

The region of Jharkhand lies in eastern part of India, also known as Chotanagpur, as the plateau with same name comprises a major part of the state. According to popular folklore, legends and theory proposed by Dr. S.C. Roy, Austroasiatic communities; Munda, Bhumij, Ho, and more have moved into the region sometimes around Early Historic period, through Ruhelkhand, Bundelkhand and Rohtas Garh, located in the northwestern area from the state. Crossing through Palamou of north west portion, they entered and finally disperse in central and southern part of the state; presently comprises of Ranchi, Khunti and Singhbhum districts. On the way, they have been divided themselves into different clans. During their course of movements, they must have camped for certain period of time in the route, which is been marked by their funerary monuments and memorials over the landscape in clusters and alignments, making pattern of migratory landmarks from northwest part of the state to the central and southern part and also in the bordering region of neighboring states. The paper discusses the archaeological ad ethnographic evidence of past and present to understand the movement of these communities, considering the distribution pattern of ancient megalithic sites and the present settlement of the people and their ancestral and presently raised monuments. The inference is made on the basis of direct historical and general comparatives analogies, considering the archaeological data and ethnographic evidence of funeral remains and custom, typology of burial monuments and land use pattern by the Austroasiatic communities for the living and the dead.

3. “Masking the Transphobia: A contemporary archaeology of the mask to corona virus” Violet Baudelaire Anzini

Is it possible that clothes impact directly in the social interactions between people? In this essay, I aim to debate about the social impacts of the use from antivirals mask against corona virus for transgender people. It’s known in the scientific literature, especially in anthropology and archaeology, that the clothes are important things in the entangled of the social lives. In many cultural contexts, mask can be used and interpreted like an entity, like a magic thing, or like something that have the power of communicate important symbolic aspects that structures the interactions between people. In this case, I’m trying to understand how the use of mask, may enable that transgender people movement themselves within social places without be targets of the transphobia made by cisgender people. This is a problematic case, where the mask literality allows that a transgender person can “hide” themselves, even this is not the intention of the mask, and it apparently allows that this person can move around with more security, free of hate looks etc., that is, like a cisgender person. It is interesting because make us think about the surgery procedures that allows “transCISgendering” people and promote similar impacts, but the surgery of facing modifications is a very high coast procedures, and this kind of modifications is permanent, in the other hand, the mask is not permanent and wouldn’t be intelligible use these masks in a non- pandemic conjuncture. The objective of this study isn’t defending that transgender people need to use masks or make surgery procedures, because obviously, the transphobia is a violent system of oppression engendered by cisgender society, therefore this study intends, through a contemporary archaeology, understand how the transphobia and the cisgender compulsory system is hidden in the contemporary things or materiality, and its movements into landscapes.

4. “The medicines of the forest and perceptions of healing for mental disorders” Karlene Bianca de Oliveira

The work presented here is a part of my doctoral research in visual anthropology, still in its early stages. Its main objective is to investigate the indigenous notions about the category that encompasses mental disorders (widely known as madness) and its causes in the body, mind, and spirit, and the use of forest medicines as a form of healing. We are living in difficult times in which the rescue of ancestral and traditional wisdom and Nature is necessary for an improvement in the quality of life, as well as cases of mental disorders in urban centers and Indigenous Lands are increasing due to a great disharmony that has been occurring between the individual, his body, his soul, the enchanted beings, and nature itself. Through these factors, we see the importance of the knowledge about the medicines of the forest for an improvement in the quality of social and mental life. The issue of the exacerbated allopathic medicalization present in the treatments for mental disorders appears with some questions to be taken to the fieldwork: what other means and methods would be possible to reduce the use of medication? Are they really necessary or are they still a social/cultural control coming from a growing pharmaceutical industry? What would the implementation of forest medicines and other indigenous healing therapies look like in the Unified Health System? How can Indigenous perceptions of illness and healing help us understand what we name as mental disorders? The research is being carried out in the field, through observation, interviews, living experiences, and ethnographic work. As previously stated, the research is in its initial phase, so it will present data from bibliographic research and the interviews already carried out.

Francisca Angola, a creole woman of the seventeenth century, was born in one of the many “palenques” (maroon settlements) of the north coast of Colombia. Her mother Lucia and her father Agustin both identified as Angolas ran away from Cartagena after being arrived at the beginning of the same century, in one of the ships that brought enslaved directly from the west coast of Africa. At the probably age of 70th Francisca and some of her descendants were caught by Spanish soldiers after a military entrance into her Palenque and taken for a trial in Cartagena. Francisca ́s declaration offers a glimpse into the dynamics of mobility, social relations, and daily life of the maroons of the second half of the seventeenth century in the old Province of Cartagena de Indias.
Based on the analysis of archival sources, as well as of the material culture, for this short presentation I propose a discussion about the role of marronage ́s mobility in the emergence and persistence of a landscape, that I have called, a landscape of freedom. While the Kinship relations allows following the ties between the inhabited palenques, the material culture recovered on field, suggest a broader network of connections of their inhabitants. In extend, both elements allow a broader comprehension of marronage ́s mobility in the shaping of this landscape in “la Sierra de la María, in the old Province of Cartagena de Indias, during the seventeenth and eighteen century.

6. “The flow of rubber seeds in the making of modernity” Tiago Silva Alves Muniz

In 1876, Sir Henry Alexander Wickham collected 70,000 rubber seeds in Santarém (Pará). Shipped to Kew Gardens, London, the seedlings of Hevea brasiliensis were introduced in Ceylon (now Sri Lanka), collapsing the Brazilian rubber economy in the following years. Rubber products, such as gloves, snow boots, tires, gaskets and industrial items, by turn of the 20th century would shape the world into what one might call “modern”. Through archaeological materials found in the village of Boim (Santarém, Pará), historical data and the material culture involved in the rubber boom are discussed here, as rubber became one of the black boxes of modernity – in a Latourian perspective – and as people today deal with this heritage and its future. Therefore, the aim here is to explore the debate about the contemporary past through historical and contemporary archaeological entanglements: historical context, materiality of the rubber boom and Amazonian local knowledge. The historical content addresses the creation of Portuguese villages during the colonization of the Brazilian Amazon and the role of backcountry drugs in its economic development. The first rubber boom (1850-1920) links with material culture studies of the contemporary past in the Amazonian communities that produced latex during the rubber boom. In the present, these rubber tapper communities still hold remnants of the rubber boom and some yet produce latex to manufacture handicrafts, as they use their own recipes to coagulate latex, adding local substances. These rubber tappers’ practices reveal agencies, local knowledge and heritage rather than just the foretold ‘loneliness in the jungle’. As an elastic that stretches, rubber items completely changed the world economy and – if we have ever been modern – it was rubber that entangled and consolidated the Industrial Revolution and globalization.

Join us for the presentations and live discussion at 14:00 GMT!