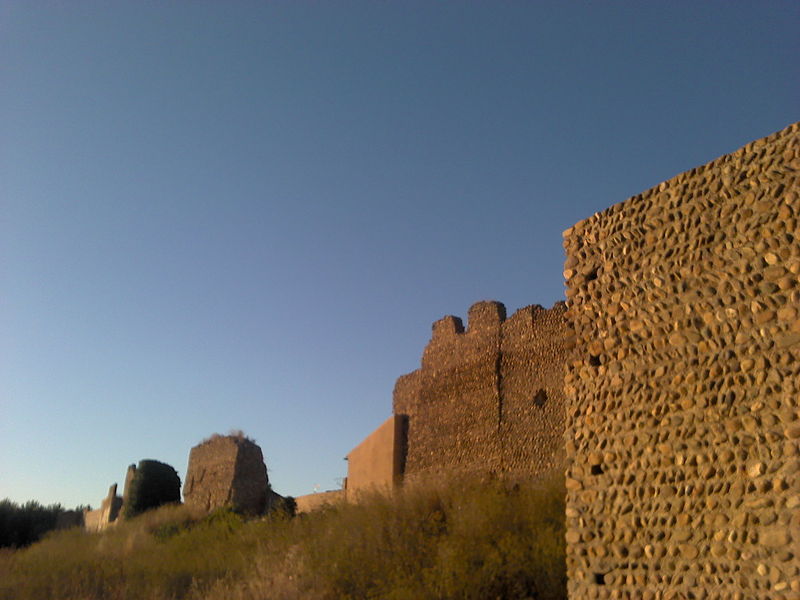 Again a quite long distance for today. Again a landscape full of small details and begining a more clear transition into the mountain. There is almost nothing in the way, beyond many infraestructure for pilgrims. If you are lucky, maybe you can see some light plane, as you will pass by a small aerodrome…

Although they are present along the whole way, from this region you can also pay more attention to the ‘cruceiros’, big crossess that follow the camino and mark relevant places in the landscape, like crossing points.

And… as you can see in the image, Mansilla has a wall!

10:00 GMT – An introduction to wayside archaeology

I propose a Twitter paper (akin to last year’s ‘blue bird’ sessions) with a series of 25 or so tweets. Wayside archaeology is my new(ish) area of research, which seeks both to appreciate lesser-known sites but also to think beyond the structures (mental and physical) which make up ‘heritage’. As well as expanding public interest, I argue we should now be setting out our future interpretations of current sites, lest we be misinterpreted in the years to come. I will reference the science fantasy series ‘the Book of the New Sun’ by Gene Wolfe as well as the work of future archaeologist Robert Smithson.

10:30 GMT – A history of my grandmother in stolen airline cutlery

I inherited very little from my grandmother, but in clearing out her home after her death I made sure to keep hold of the small bundle of cutlery that she had stolen, mostly from airlines, during her lifetime. Air travel is a peculiar experience of liminality, non-places, and diverse sensory environments, and airline food is a key part of this experience. For my grandmother, air travel was a great luxury, and a connection to people spread across the world. The knives, forks and spoons that she stole were souvenirs of these experiences, and in retrospect they map her life as a child of poverty, a colonial settler, a reluctant traveller, a cook, a host, and as part of a spatially dispersed network of kinship and friendship.

Since Industrial Archaeology emerged as a sub-discipline in the late 1950s and early 1960s there has been a tendency in Britain to both memorialise sites as THE birthplace of the Industrial Revolution, and to turn industrial archaeology and heritage remains into visitor attractions, inviting the public in to take part in a particular type of heritage experience. Often, but not always, these two approaches go together. This tendency to promote both memorialisation and tourism goes back to the very beginnings of the industrialisation process in Britain. An early and long-lived case study is the underground coal mines at Worsley and their entrance via the Bridgewater Canal (usually seen as the industrial canal that promoted the canal revolution) in Salford, Greater Manchester.  This twitter paper will look as successive waves of tourism and memorialisation, including royalty, politicians, and industrial espionage, focussed on the business end of one of the most iconic sites of the Industrialising period, from the opening of the canal in 1761. These waves were stimulated by conscious attempts at commemoration on significant anniversaries (the 100th, 150th, 200th and 250th anniversaries of the canal’s opening), most recently in 2011. It will look at the different motivations of visitors and will reflect on the changing interpretations of and access to the canal and the coal mine entrances from the 18th to the early 21st century’.

So, I begin this session, many thanks to @CHATArch , and have three main sections, and then maybe some questions if that is of interest pic.twitter.com/IWjSEWveEM

A history of my grandmother in stolen airline cutlery – Gabriel Moshenska

Hello @chatarch! This short ‘presentation’ in linked tweets is a mini-investigation of my late grandmother’s collection of stolen airline cutlery and the life stories it might tell. @chatarch #pilgrimCHAT pic.twitter.com/VzxR2nf1gQ

1/15 Hi @chatarch! I’m taking you on a watery meander through time and space – ‘Industrial Archaeology as Pilgrimage: Venerating the Bridgewater Canal & Mines at Worsley 1761 to 2021’ #pilgrimCHAT pic.twitter.com/KfGLs3Cj29

The train commute between Philadelphia and Lancaster, Pa. takes place along one of America’s most historical train line. Lasting a little over an hour, the commute gives a visual cross-section of America along seven urban ecologies: from the prosperous downtown, the depressed inner city, the historical suburbs, the postwar car exurbs, steel towns, and farmland. As Wolfgang Schivelbusch argued, the railroad transformed the mental experience of time and space including our perception of architecture. In 1823, the State of Pennsylvania chartered the construction of the first 82 miles of railway from Philadelphia to the Susquehanna River. Known as the Main Line, this route gave birth to the earliest American suburbs replete with new buildings of religious worship. Travel by rail provides a visual continuum for the apprehension of a sting of churches along the Main Line’s temporal-spatial horizon. Although experienced traditionally through the embodied rituals of their respective parishioners (on Sunday), commuters intuited the same buildings from the window of their commute (Monday through Friday). Built after the advent of the train, these churches are in fact poised as visual nodes perceived from the train. Rail Faith has inventoried 47 churches along the Philadelphia-to-Lancaster route. They have been mapped cartographically in their geospatial location as well as momentary visual objects from the train. The presentation will replicate the experience from the train window along with a geographic and historical inventory of their location in cartographic space. The presentation will have a static ArcGIS StoryMap presentation with contextual information and two (westward and eastward) videos. If timing allows, the view from the window can be presented as an interactive live event during the authors commute Philadelphia-to-Lancaster in the morning (6:20-7:33 am EST) and Lancaster-to-Philadelphia in the afternoon (3:42-4:56 pm EST). We will raise broader questions about the possibility of religious pilgrimage in the disembodied experience of industrialized rail travel.

The workshop will take around one hour, exploring the maps.

Join the workshop with Kostis at 16:00 GMT