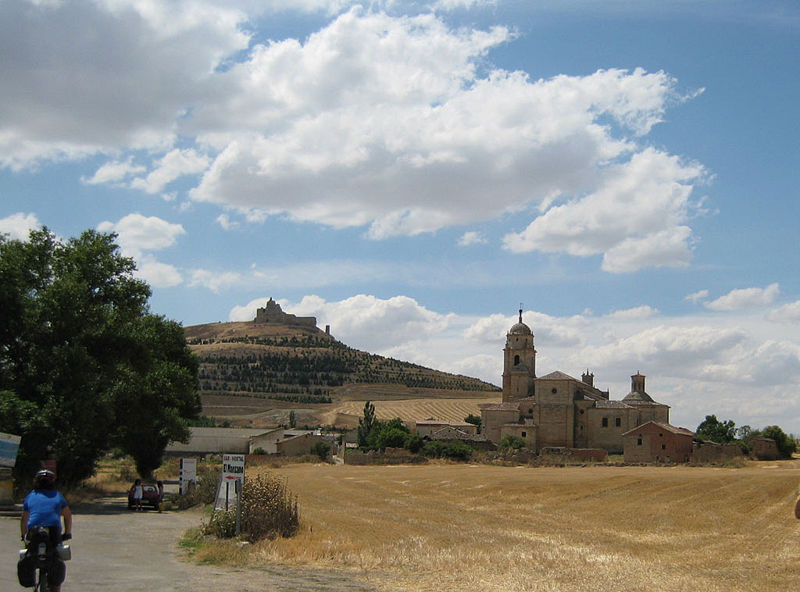 Today we have a nice easy (and short) way to the next village, Castrojeríz (image), that is quite charming.

On the way there are many other cute villages, all of no more than 100 people living there, with their cute chapels and churches and large fields of cereal around. It would not be crazy to take some diversions in the way, but it is better to keep the strenght. There is still a long way to go.

17:00 GMT – The celebration of St. Viniri at Băeasă (Vovousa): the archaeology of walking and the Sacred Forests of NW Greece.

In recent years there is a growing interest in the “Sacred Forests” (hereafter vakoúfika) of Zagori and Konitsa in NW Greece. These belong to the National Inventory of Intangible Heritage and have recently attracted interdisciplinary interest from cultural biologists, anthropologists, and conservationists working with the communities associated with these Sacred Natural Sites (IUCN). Vakoúfika are either groves or individual trees, dedicated to patron-Saints, protected through customary laws, communal regulations, religious excommunications, and supernatural narratives. They represent ca. 300 years old tangible reminders of rituals, beliefs, and pre-modern ways of managing the commons that to an extent survive in the present. This presentation wishes to introduce archaeology into the interdisciplinary discourse encompassing the Sacred Forests. Through the concepts of dwelling, walking, and archaeological ethnography, we will evaluate the concept of static “traditional” mountainous communities and focus on the changes that might have occurred to the rituals and beliefs associated with vakoúfika over the past centuries. The case study is the Sacred Forest of Băeasă (Vovousa), dedicated to St. Viniri (Aromanian for Hagia Paraskevi) and the associated rituals.

17:45 GMT – Running as an interpretative practice and the urban fabric

The proposed short paper will explore urban running and associated athletic activities in the context of the city as a type of contemporary protest performance. Departing from the mundane activity performed by independent subjects for fitness or recreational purposes -i.e. also the main representation of running in art-, we examine running as a collective process of reclaiming the streets and the pavements of the city, common goods gobbled up by the commodified surroundings and the omnipresent cars (De Angelis 2017).

We consider bodies dressed with bright colours as forming trajectories within the urbanscape, encountering human and other than human entities (animals, street furniture), organising an extra layer of meaning, that of a fleeting assertion to the right to the city (Lefebvre 1968). Big running events that halt the life of the city are examined in relation to public manifestations of dissent, discussing aspects of temporality, performativity and the nature of protest.

This paper will draw empirical evidence from the horizontally and non-hierarchically organised, independent runners’ movement, ‘Aneftaoratos’, risen within the locked-down cities of Athens, Greece and Newcastle, UK in 2020. “Aneftaoratos (Greek adjective means disappearing suddenly by running, mainly used in the realm of the fantastic literature) is formed by runners of all ages, working collectively and respectfully to the community of runners and non-runners, against the commercialised forms of street sports and mainly the discriminatory and/or sexist parole” (Lekakis 2020).

18:30 GMT – The effects of international relations on the process of travelling to the Falkland Islands

The Falkland Islands (a.k.a. Las Islas Malvinas) are at the southern end of the Atlantic coast of South America, and Britain and Argentina went to war over them in 1982.

I was born in the islands in 1963, my family moved to the UK in 1976, and in 2005 I returned to the islands for a week as part of a round-the-world trip. There were shifts in Anglo-Argentinian relations during my childhood which led to considerable changes in the methods of travelling to the islands, and the war changed everything yet again.

Any theoretical or archaeological content in this presentation is entirely accidental. I am taking advantage of the theme of “Movement” to talk about my experience of growing up in a very strange place in a very strange time. Among other diversions, there will be photos of penguins nesting in minefields.

After the papers there will be some time for discussion with the authors and between us!

A conference (in Spanish) about migrations [the memory that travels] that you can join if interested in the topic. We were invited to participate in the presentation last Thursday and wanted to share it with you too as part of the program. All the info at: https://www.buenavistadelnorte.travel

If you are interested, ask us by email for the Teams link.