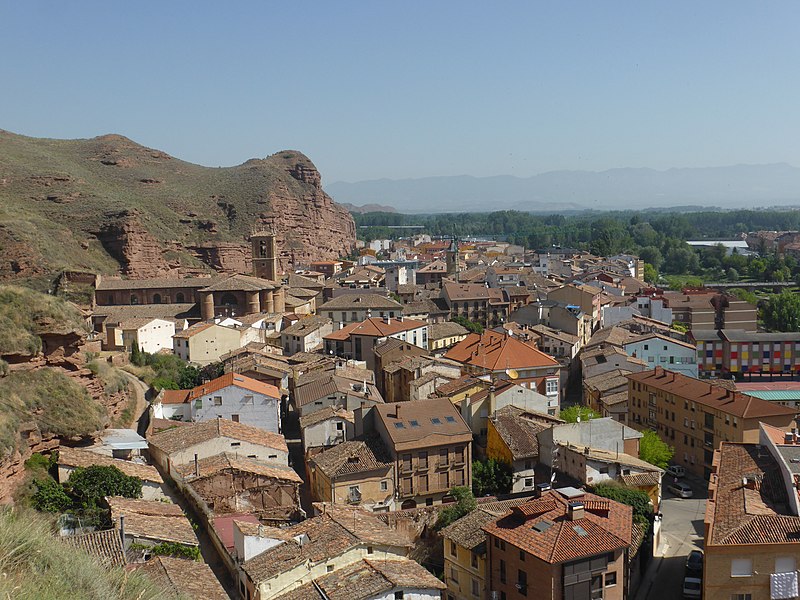 We leave Logroño. Maybe we could have stayed there for one extra day… to make a tour to the wineries of Haro area. However, the Camino calls and we must continue our way.

We go parallel to the highway most of the time and the view is starting to be a bit repetitive. Almost 30 kilometers to arrive to Nájera and the fastest we do them, the better. There are a couple of wineries in the way… “visit La Rioja with more time” is already in the notebook. When we get near Nájera the view is really nice (panoramic from the top in the image). We need to remember to visit Santa María la Real in the afternoon. Wine? There is always good wine around here…

The graffiti of the final 100km along the French Way of the Camino comprises ink scrawls of text. The graffiti is in the context of pilgrimage and the Camino, however, they are not sentiments of well-wishes or religious motifs as one might expect. Instead, the predominance of the gravity comprises a destination focused text. An example of this ‘Santiago didn’t start in Sarria’, is suggestive of the competitive mindset of modern pilgrims that believe they have travelled further than those around them. Whilst this is certainly the case for some pilgrims, who have travelled from Burgos, León, Roncesvalles, or even St Jean Pied de Port (780km from Santiago de Compostela), others travelled from much further afield, and some from Sarria (100km from Santiago de Compostela). The underlying tone of such graffiti suggests a competitive element of pilgrimage and challenges the concept of a ‘real pilgrim’ amongst those that travel the Camino.

Whilst on pilgrimage, it might be expected to experience heirophany (Skousen 2018). However, the route to Santiago de Compostela suggests an alternative mindset to one of sacred devotion (Dunn 2016). Indeed, the presence of sacred manifestations in objects, including trees, stones and even the modern waymarkers is prevalent (Photo 1 is an example of an untouched waymarker). Trees and branches dripping in scallop shells and ribbons (Photo 2), stones with the remains of written well-wishes and blessings, and waymarkers laden with pebbles and former pilgrim boots are indicative of the more personal and mindful focus of the pilgrim; they are a statement of belief and presence (Candy 2007).

Certainly, there is evidence of heirophany along the final 100 kilometers (km) of the St Frances’ Way of the Camino. However, more prevalent is the remains of an alternative mindset; one of self-righteousness and a ‘holier-than-thou’ discourse as modern pilgrims approached their destination of Santiago to receive their Compostela (the certificate of completion). The waymarkers along the final 100km of the Camino are littered with scrawls and pilgrim graffiti is comparatively prevalent to the previous km. They form the tangible remains of modern pilgrims’ mindset and their attitude to those they perceived were only travelling the mandatory km to their collective destination (100km if walking and 200km if cycling to receive the Compostela).

Graffiti is not a new concept, and remains of such have been identified throughout the world and over centuries. Moreover, graffiti associated with pilgrimage and pilgrims has been identified in places of worship and along pilgrim routes. A recent study of historic pilgrim marks and etchings at Chichester Cathedral (UK) identified the possible pilgrim route within the Church (Ingram 2015). The medieval graffiti formed symbols, such as crosses, geometrics, and text, which were identified as common themes of this period (Pritchard 1967). These marks are not formed of pen and ink, however, they do confirm that graffitiing pilgrims are not confined to the 21st century and the graffiti of this discourse is similarly prosaic.

The evidence of a mindset

The evidence of a pilgrim’s mindset is left as text predominantly on the Camino waymarkers (Photos 3, 4). The text, as depicted in Photos 3 and 4, commenced at and throughout the last 100km of the Camino. The text included words that could be deemed disparaging, competitive or written in jest, in some instances.  Santiago/Jesus didn’t start in Sarria is the main theme of the graffiti. Certainly, the graffiti depicted here does not provide evidence of all pilgrims’ mindsets along the Camino. Rather, a few pilgrims that wish to ‘voice’ their thoughts and make known to fellow pilgrims that they may not believe that a real pilgrim takes on the minimum effort necessary to be confirmed as a pilgrim of the Camino. The presence of this graffiti has provided valuable evidence of how a modern pilgrim may approach their fellow travellers. However, it is also likely that individuals that graffiti such negative connotation may also provide evidence of the individual aims and objectives of taking on pilgrimage and view the Camino as a sport, rather than religious or spiritual. Therefore, it cannot be assumed that the graffiti provides evidence of all pilgrims’ mindsets.

Whilst the concept of a ‘real pilgrim’ has, perhaps, changed over the centuries, the need to define and control the definition has remained constant throughout the centuries and is also evident in the modern period. Moreover, it appears that pilgrims themselves contribute to the concept as much as the associated organisations.

The definition of a real pilgrim may have changed throughout history. However, the need to define and distinguish between those that travel along the Camino and those that have ‘truly’ earned the Compostela of the Camino is prevalent today. The graffiti along the last 100km from Sarria is evidence of just such. The motifs are not evidence of personal heirophany, rather evidence of a prosaic thought process, of competition, and the need for affirmation that some pilgrims require to feel as though they are indeed a real pilgrim of the modern era.

Ingram, J. (2015) An initial survey to identify and understand the meaning of medieval graffiti within Chichester Cathedral: Distinguishing pilgrim marks from other graffiti and unofficial inscriptions. Southampton: University of Southampton

1 – image description: A photo of a pale grey concrete waymarker that displays a yellow arrow on a blue background and an abstracted depiction of a yellow pilgrimage shell on a blue background. Below the shell and the arrow are numbers depicted 200.2km. This is the number of kilometres in distance from Santiago de Compostela. The waymarker is located on a gravel and dirt track with vegetation to the side of a tarmacked road. The photo was taken on a clear and bright day and the sky is clear blue in the photo.

2 – image description: Many pilgrimage shells tied up and strung together on a branch. The branch is supported at the behind the shells. The shells completely obscure the support system and it looks as though the branch is suspended and held up by the shells that cascade to the floor. The surrounds comprise a stone pathway with vegetation and a tree that acts as a backdrop to the shell branch.

4 – image description: The side of a grey concrete waymarker. The image is zoomed in to focus on the scrawls of text written on the side, but the background clearly shows the very bright and sunny day. The text on the way marker includes the text of a blue marker pen ‘Jesus didn’t start in Sarria’. There is also other text above this sentence in black ink and includes peoples’ names. Further green linear pen markings are also visible that extend across the waymarker.

Haro region, barely over 20 kilometers from Nájera, is not only a really nice town, but also the center of Rioja wines. In terms of industrial heritage, the old and new designs are awesome, and it is always a great diversion for an extra day in the Camino…